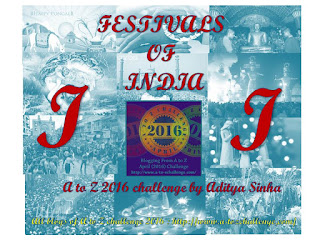 Id – Ul – Zoha or Eid al-Adha  is the "Festival of the Sacrifice", also called the "Sacrifice Feast" or "Bakr-Eid", and is the second of two important Muslim holidays celebrated worldwide each year. It honours the willingness of Ibrahim (Abraham) to sacrifice his son, as an act of submission to God's command, to which God intervened, through his angel Jibra'il (Gabriel) and informs him that his sacrifice has already been accepted.
The word "Eid" means "solemn festival, and thus Eid ul-Adha is the latter of the two Eid holidays, the former being Eid al-Fitr (Sewai Eid – Festival of Breaking Fast).

The festival is also called "Bakr-Eid" in Urdu and commonly in India originating from the Arabic word al-Baqara meaning "The Cow", Although some have wrongly attributed it to the Urdu and Hindustani word bakrī, meaning "goat", because of the tradition of sacrificing a goat in India & South Asia on this festival. 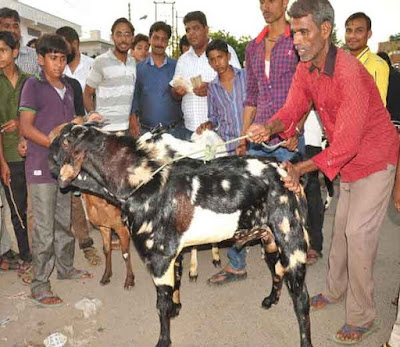 In the Islamic lunar calendar, Bakr-Eid falls on the 10th day of Dhu al-Hijjah and lasts for four day and differs in the Georgian calendar from year to year drifting approx. 11 days earlier each year. Confirmations of actual dates are done by moon sighting and are applied to announce the specific dates for both Hajj rituals and the subsequent Eid festival.

Tradition Belief:
According to Islamic tradition, the valley of Mecca (in present-day Saudi Arabia) was a dry, rocky and uninhabited place. God instructed Abraham to bring Hagar (Hājar), his Arabian (Adnan) wife, and Ishmael to the Arabia from the land of Canaan.
As Abraham was preparing for his return journey back to Canaan, Hagar asked him, "Did God order you to leave us here? Or are you leaving us here to die." Abraham didn't even look back. He just nodded, afraid that he would be too sad and that he would disobey God. Hagar said, "Then God will not waste us, you can go". Though Abraham had left a large quantity of food and water with Hagar and Ishmael, the supplies quickly ran out, and within a few days they were under hunger and dehydration.
Hagar ran up and down between two hills, al-Safa and Al-Marwah, seven times, in her desperate quest for water. Exhausted, she finally collapsed beside her baby Ishmael and prayed to God for deliverance. Miraculously, a spring of water gushed forth from the earth at the feet of baby Ishmael.  With this secure water supply, known as the Zamzam Well, they were not only able to provide for their own needs, but were also able to trade water with passing nomads for food and supplies.
Years later, Abraham was instructed by God to return from Canaan to build a place of worship adjacent to Hagar's well (the Zamzam Well). Abraham and Ishmael constructed a stone and mortar structure – known as the Kaaba – which was to be the gathering place for all who wished to strengthen their faith in God. As the years passed, Ishmael was blessed with nubuwwah (prophethood) and gave the nomads of the desert his message of submission to God. After many centuries, Mecca became a thriving desert city and a major center for trade, thanks to its reliable water source, the Zamzam Well.
One of the main trials of Abraham's life was to face the command of God to sacrifice his dearest possession, his son Ismail. Upon hearing this command, Abraham prepared to submit to will of God. During this preparation, Shaitan (the Devil) tempted Abraham and his family by trying to dissuade them from carrying out God's commandment, and Abraham drove Satan away by throwing pebbles at him. In commemoration of their rejection of Saitan, stones are thrown at symbolic pillars during the Stoning of the Devil during Hajj rites.
In order to obey God's will Abraham cut Ismail's throat as sacrifice. He was astonished to see that his son was unharmed and instead, he found a dead ram which was slaughtered. Abraham had passed the test by his willingness to carry out God's command.

Muslims commemorate this ultimate act of sacrifice every year during Eid al-Adha / Id-ul-Zoha. While Abraham was prepared to make an ultimate sacrifice, God ultimately prevents the sacrifice, additionally signifying that one should never sacrifice a human life, especially not in the name of God.

Traditions and practices
Men, women and children to dress in their finest clothing to perform Eid prayer in a large congregation in an open field called Eidgah or mosque. Affluent Muslims who can afford it sacrifice their best “halal” domestic animals (usually a cow, but can also be a camel, goat, sheep or ram depending on the region) as a symbol of Abraham's willingness to sacrifice his only son. The sacrificed animals is called aḍḥiya (Arabic‎), or Qurbāni,

The meat from the sacrificed animal is preferred to be divided into three parts. The family retains one third of the share; another third is given to relatives, friends and neighbours; and the remaining third is given to the poor and needy. Though the division is purely optional wherein either all the meat may be kept with oneself or may be given away to poor or needy, the preferred method as per sunnah of Muhammad is dividing it in three parts.

During Eid al-Adha, distributing meat amongst the people, chanting the takbir out loud before the Eid prayers on the first day and after prayers throughout the four days of Eid, are considered essential parts of this important Islamic festival. In some countries, families that do not own livestock can make a contribution to a charity that will provide meat to those who are in need.

Eid al-Adha/ Bakra-Eid is known by different names across the world and is observed across the globe.

For my parallel second Challenge blog with A pls visit : Let the Soul Pour