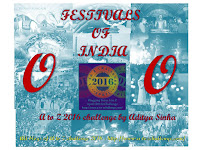 Onam a major Hindu festival celebrated as the state festival in the southernmost state of India – Kerala. The state observes State holidays on 4 days starting from Onam Eve (Uthradom) to the 3rd Onam Day. One of the main part of Onam celebration is making "atha pookkalam" (making patterns using different flowers like Rangoli in North India). Onam is celebrated from "atham (first day) to thiruvonam" (last day).

The festival falls during the Malayalam first month of Chingam (Aug - Sep) and marks the commemoration of Vamana avatara of Hindu God Vishnu and the subsequent homecoming of the mythical King Mahabali. In Kerala, it is the festival celebrated with most number of cultural elements such as Vallam Kali, Pulikali, Pookkalam, Onathappan, Thumbi Thullal, Onavillu, Kazhchakkula, Onapottan, Atthachamayam etc. Onam is reminiscent of Kerala's agrarian past, and is considered to be a harvest festival.

Onam is a community festival essentially connected with celebrations in temples. It marks Kerala's rice harvest festival and the Festival of Rain Flowers, which fall on the month of Chingam, & celebrates the Asura King Mahabali's annual visit from Patala (the underworld). Onam is unique since Mahabali has been revered by the Hindu people of Kerala. Mahabali's rule is considered to be the golden era of Kerala. The King is so much attached to his kingdom that it is believed that he comes annually from the nether world to see his people living happily. It is in honour of King Mahabali that Onam is celebrated. The deity Vamana, also called Thrikkakarappan is also revered during this time by installing a clay figure next to the floral carpet (Pookalam) .The birthday of Sri Padmanabhan, the presiding Deity of Thiruvananthapuram, is on the Thiruvonam day in the month of Chingam and is the most important day of Onam.

Onam mythology may have been devised as a political allegory/tool where by the subjects could remind the rulers about an Ideal King and a welfare state. Onam songs mentions many of the modern social / economic indicators of a Welfare State including Crime rates, Child Mortality rates etc. Rulers may also have promoted it as it may have served as an indicator/barometer of the popularity/unpopularity of their Governance policies. The beauty of the festival lies in its secular fabric. People of all religions, castes and communities celebrate the festival with equal joy and verve. Onam also helps to create an atmosphere of peace and brotherhood by way of various team sports organised on the day.

The celebrations begin within a fortnight of the Malayalam New Year and go on for ten days. All over the state of Kerala, festive rituals, traditional cuisine, dance and music mark this harvest festival. The ten day Onam festival is considered to be flagged off with Atthachamayam (Royal Parade on Atham Day) in Thripunithara (a suburb of Kochi City). The parade is colourful and depicts all the elements of Kerala culture with more than 50 floats and 100 tableaux. The main center of festival is at Vamanamoorthy Thrikkakara temple within Kochi City, believed to be the ancient capital of King Mahabali. The temple is dedicated to Lord Vamana and is directly linked to the mythological background of Onam.

The ten days of Onam are celebrated with great fanfare, by Malayalees. Of all these days, most important ones are the first day, Atham, and the tenth and final day, Thiru-Onam (Thiruvonam). The rich cultural heritage of Kerala comes out in its best form and spirit during the festival.

The floral carpet, known as ‘Onapookkalam’, is made out of the gathered blossoms with several varieties of flowers of differing tints pinched up into little pieces to serve the decorator's purpose. It is considered a work of art accomplished with a delicate touch and a highly artistic sense of tone and blending and is similar to Rangoli made in North India.

As Onam is the harvest festival of Kerala, the special feast lunch on that day is served on banana leaf and usually has rice and more than 10 side dishes and a sweet at the end.

Traditional dance forms including Thiruvathira, Kummattikali, Pulikali, Thumbi Thullal etc. are performed as part of celebrations all over Kerala at this time. Thiruvathirakali is a women's dance performed in a circle around a lamp, and is given special importance during Onam. Kummattikali is a famous and colorful-mask dance. In Thrissur, festivities includes a procession consisting of caparisoned elephants surrounded by Kummatikali dancers. The masked dancers go from house to house performing the colorful Kummattikali.

The Vallamkali (the snake boat race) is another event that is synonymous with Onam. Well-known races include the Aranmula Uthrattadhi Boat Race and the Nehru Trophy Boat Race. About 100 oarsmen row huge and graceful snake boats and men and women come from far and near to watch the snake boats skim through the water. As a tribute to the traditional snake boat race, a similar snake boat race is also held by the Malayali diaspora in Singapore annually during Onam at the Jurong Lake.

The swing is another integral part of Onam, especially in the rural areas. Young men and women, decked in their best, sing Onappaatt, or Onam songs, and rock one another on swings slung from high branches.