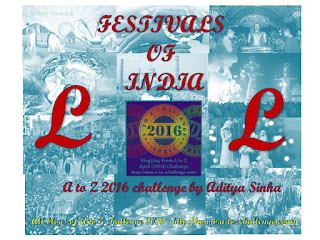 Lohri is a popular festival celebrated in the Punjab region of India. There are many origins of Lohri - all forming part of folklore. However, the main theme of Lohri is the belief that Lohri is the cultural celebration of the winter solstice and is understood to be started as celebration on the shortest day and longest night of the year.

During the day, children go from door to door singing folk songs. These children are given sweets and savories, and occasionally, money. Turning them back empty-handed is regarded inauspicious. Where families are welcoming newly-weds and new borns, the requests for treats increases.

The collections gathered by the children are known as Lohri and consist of til, gachchak, crystal sugar, gur (jaggery), moongphali (peanuts) and phuliya or popcorn. Lohri is then distributed at night during the main festival which consists of bonfire and gathering around singing and dancing. Till, peanuts, popcorn and other food items are also thrown into the fire.

The bonfire is lit at sunset in the main village square or at the entrance of their houses. People toss sesame seeds, gur, sugar-candy, groundnut and rewaries on the bonfire, sit around it, sing and dance till the fire dies out. Some people perform a prayer and go around the fire. This is to show respect to the natural element of fire, a tradition common in winter solstice celebrations. It is traditional to offer guests til, gachchak, gur, moongphali (peanuts) and phuliya or popcorn. Milk and water is also poured around the bonfire by Hindus. This ritual is performed for thanking the Sun God and seeking his continued protection.

Singing and dancing form an intrinsic part of the celebrations. People wear their brightest clothes and come to dance the bhangra and gidda to the beat of the dhol. Punjabi songs are sung, and everybody rejoices. Sarson da saag and makki di roti is usually served as the main course at a Lohri dinner.

Kite flying on Lohri is popular in some parts of Punjab as the same is in parts of UP & MP on the occasion of Makar Sankranti the next day. People get onto the roof tops or open fields and fly kites of various sizes and colours.

Festival with same theme in other parts of India:

As already said Lohri coincides with the festivals of Makar Sankranti, Pongal, Bhogali Bihu and Bhogi all of which are harvest festival of that region / winter solstice and is celebrated around the same time (13th – 14th January).