Govt. of India made it mandatory from April 2014 for every company, private or public limited, that has a net worth of Rs 500 crore or a turnover of Rs 1,000 crore or net profit of Rs 5 crore, to spend at least 2% of its average net profit for the immediately preceding three financial years on corporate social responsibility activities.

Thus, became CSR as an integral part of Corporates in India. These activities may be from a long list provided in the CSR act and includes eradicating hunger, poverty and malnutrition, promoting preventive healthcare, promoting education and promoting gender equality, setting up homes for women, orphans and the senior citizens etc.

Credit Sudhar http://www.creditsudhaar.com - India’s premier credit health management company has also come forward to building a better India with its share of regular CSR activities. Taking forward its initiatives in CSR – it came up with yet another activity aimed at improving the educational infrastructure in the country’s rural areas, a requirement that is central to the growth for any community.

In today’s times, it is accepted that technology is the way to go, and has become an integral part of life for every individual. The knowledge of basic computer management and the Internet can go a long way in improving productivity in every field. On an individual level, it provides opportunities for people, especially the youth, to embrace technology and thereby provide better employment opportunities.

While there is absolutely no doubt that the Government of India has taken bold and effective steps to digitise schools, the process is not always able, whether in part or entirety, to reach all schools owing to various socio-political factors including but not limited to the small size of student population, extreme rural presence, non-aligned or independent village head candidates etc.

Taking forth its thought process as the integral part of its CSR concept frame, Credit Sudhaar identified one such village – Pimpri – located in Yavatmal  district of Maharashtra; to introduce their campaign of digitising rural schools. The population of this village was not more than 500 individuals, and a significant chunk of the population – over 15 percent – comprised of children between the ages of 0 to 6 years. This made connectivity to schools in villages such as Pimpri even more significant, wherein future generations were being nurtured. Another factor in zeroing in on Pimpri village was the fact that it rightly boasted of a higher literacy rate compared to the rest of Maharashtra, as per the data provided by the Census 2011.

As part of the initiative, the Credit Sudhaar team visited Pimpri village along with the required peripheral. Computers, printer, projector were installed and run in presence of the village sarpanch, village head, the school management committee (comprising of school parents) teachers and student on 11 May 2016. 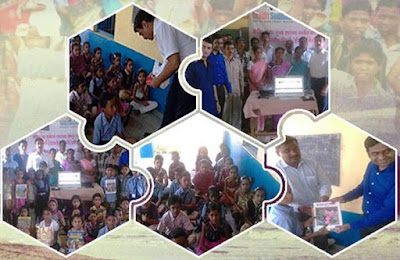 With this initiative, the teachers were confident to make a vast change in the teaching methodologies that would help students learn better and also learn to manage computers at an earlier age.

The wholehearted and active participation from Team Credit Sudhaar made this CSR initiative highly successful. The team expressed that Credit Sudhaar, under its CSR policies was committed to continued contribution towards betterment of society in whatever little ways it can.