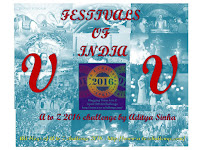 Vijayadashami also known as Dussehra, Durga Puja or Ayudha puja, is one of the most important Hindu festivals. The festival celebrates victory of good over evil. It is celebrated in various forms, across India, Nepal, Sri Lanka, and Bangladesh as well as parts of Pakistan. The name Dussehra being derived from Sanskrit - Dasha-hara literally means Dashanan ravan (short name of Ravan as dasha) and Hara meaning defeat i.e  Lord Rama's victory over the ten-headed demon king, Ravana. Vijayadashmi – Vijaya means victory and dashmi denotes the 10th day of the lunar calender on which the day falls. This thus also marks the victory of Goddess Durga over the demon Mahishasura. The Goddess fought with evils for nine nights and nine days.

Diwali/Deepawali, the Festival of Lights, is celebrated twenty days after Dussehra and nine days prior to prior to Dussehra is the nine day prayer of Goddess Durga called Navratri.

Vijayadashami is celebrated on the tenth day of the month of Ashwin according to the Hindu lunisolar calendar (September / October of the Gregorian calendar). The first nine days are celebrated as Maha Navratri or Sharada Navratri (the most important Navratri) and culminates on the tenth day as Dussehra.

1. Victory of Lord Rama over Ravana

As per Hindu religion, on this day in the Treta Yug, King Rama (also called Shri Ram) the seventh avatar of Vishnu, killed Ravana who had abducted Rama's wife Sita to his kingdom of Lanka. Rama, his brother Lakshmana, their follower Hanuman and an army fought a great battle to rescue Sita. The entire narrative is recorded in the epic Ramayana, a Hindu scripture.

Rama had performed "Chandi Homa" and invoked the blessings of Durga, who blessed Rama with secret knowledge of the way to kill Ravana. On the day of Ashvin Shukla Dashami, Rama defeated Ravana and rescued Sita. Thus, it is termed as Vijaya Dashami, and thus is celebrated as a day of victory of Good over evil. Further, return of Lord Rama to Ayodhya which happened after 20 days is celebrated as festival of lights Deepawali.

This is part of the festival season of Hindu religion strating from Navratra to Deepawali. People perform "Aditya Homa" as a "Shanti Yagna" and recite Sundara Kanda of Srimad Ramayana for nine days. These Yagna performances are thought to create powerful agents in the atmosphere surrounding the house that will keep the household environment clean and healthy. On the 10th day i.e. Dussehra the yagna is culminated and Festive food is enjoyed. Celebration include meeting friends and relatives and watching Ravana Bandh & enjoying Dussehra fairs.

2. Victory of Durga Mata over Mahishasura

In West Bengal & Bihar the occasion is more piously called Durga Puja whereby for nine days prayers of Goddess Durga (Durga Path) are performed. Durga idols are instituted on the sixth day and remain open for public throughout day and night till ninth day. Glamorous pandals are made. On the 10th day i.e. Vijaya Dashmi the yagna culminates and the idols of Goddess Durga is immersed in rivers or ponds with full fanfare.

Mythology states that some of the demons, or Asuras, were very powerful and ambitious and continually tried to defeat the Devas, or Gods, and capture Heaven. One Asura, Mahishasura, grew very powerful and created havoc on the earth. Under his leadership, the Asuras defeated the Devas. The world was crushed under Mahishasura tyranny, the Devas joined their energies into Shakti, a single mass of incandescent energy, to kill Mahishasura.

A very powerful band of lightning emerged from the mouths of Brahma, Vishnu and Shiva and a young, beautiful female virgin with ten hands appeared. All the Gods gave their special weapons to her. This Shakti coalesced to form the goddess Durga. Riding on a lion which assisted her, Durga fought Mahishasura. The battle raged for nine days and nights. Finally on the tenth day of Ashvin shukla paksha, Mahishasura was defeated and killed by Durga.

Hence Dasha-Hara is also known as Navratri or Durgotsav and is a celebration of Durga's victory. Durga, as Consort of Lord Shiva, represents two forms of female energy – one mild and protective and the other fierce and destructive.

Thus Dussehra or Vijaya Dashmi is celebrated in different forms across
India. Some of them are:

Northern India: In Kashmir, Himachal Pradesh, Uttar Pradesh, Haryana, Punjab, Uttarakhand and western Bihar, it is tradition to plant barley seeds in earthen pots on the first day of Navratri (Kalash Sthapna). On the day of Dasara, the nine-day-old sprouts (called noratras or nortas or of nav ratris or nine nights) are used as symbols of luck. Men place them in their caps or behind their ears.

In most of northern India and some parts of Maharashtra, Dasha-Hara is celebrated more in honour of Rama. During these ten days, many plays and dramas based on Ramayana are performed. These are called Ramlila.

There are outdoor fairs and large parades with effigies of Ravana (a king of ancient Sri Lanka), his brother Kumbhakarna and son Meghanad. The effigies are burnt on bonfires in the evening (Ravana Badh). After Dasara, the hot summer ends, especially in North India. The onset of cold weather is believed to encourage infections. The burning of the effigies, filled with firecrackers containing phosphorus, supposedly purifies the atmosphere, while the temples perform Chandi Homa or Durga Homa, with the same intent.

In the Kumaon region of Uttarakhand, the Dasara festival starts with the performance of Ramlila which is unique as it is based on the musical rendering of the katha or story of Lord Rama.

KulluDussehra is celebrated in Kullu Valley of Himachal Pradesh is celebrated in the Dhalpur maidan in the Kullu valley and has gained international status. Dussehra at Kullu commences on the tenth day of the rising moon, i.e. on 'Vijaya Dashami' day itself and continues for seven days. Its history dates back to the 17th century when local King Jagat Singh installed an idol of Raghunath on his throne as a mark of penance. After this, god Raghunath was declared as the ruling deity of the Valley.

Southern India: Vijayadashami is celebrated in various ways in different parts of South India. It is seen as a day to express gratitude to everything that bring success in life. Celebrations can take many forms, ranging from worshipping the goddess Chamundeshwari (Durga).
Vijayadashami is also the auspicious day for starting formal education. Students keep their books and workers their tools for puja on the ninth day of Navratri (Ayudha Puja, Saraswathi Puja); these are taken back and used after puja on the tenth day (Vijayadasami). The practice is so old that in many parts of south India, even non-Hindus follow this tradition. These days are termed auspicious and any new work / venture can be started on these days.


West Bengal & Bihar: In Bengal, Dussehra is celebrated as Durga Puja and is the biggest festival there. Deities of the goddess Durga installed on fifth day are worshipped for five days, and on the fifth day (Vijayadashami) immersed in a river or pond. This is referred as Durga Bisarjan/Bhashaan. In Jharkhand, Bengal, Assam and Odisha, the goddess Kali, an appellation of Durga, is also worshipped as a symbol of Shakti (Power). In Bihar the festivity continues till Chhatha (six days after Diwali)