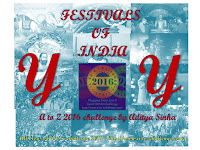 Yama Dwitiya is observed on the second day of the waxing phase of moon (Shukla Paksha) in Kartik month and is one of the last celebrations during Diwali. It falls after two days of Diwali. Yama Dwitiya is also known as Bhai Dhooj or Bhav Bij or Bhai Beej and Bhai Teeka, Godhan. Yam Dvitiya is associated with Lord Yama, the Hindu god of Death, visiting his sister Yami and is thus a symbol of love between brothers and sisters.

Legend has it that Lord Yama, the Hindu God of Death, visited his sister, Yami, on the first day of the Shukla Paksha in Kartik month after Diwali. Yami welcomed her brother with garlands and by applying the auspicious tilak or Tika on his forehead. Then the brother and sister exchanged gifts. Yami also served Yamraj his favorite dishes. Yamraj who was overwhelmed by the love of his sister is believed to have said to Yami that who receives Tilak or Tika from his sister will have to never suffer hell. Since then Yama Dwitiya is observed as a symbol of love between brothers and sisters.

Mythology also believes, after slaying the evil demon Narkasur, Lord Krishna visited his sister Subhadra who gave him a warm welcome with sweets and flowers. She also affectionately applied tilak on Krishna's forehead and thus the origin of the festival.

The celebrations of this day are similar to the festival of Raksha Bandhan (another festival of Hindu as a symbol of love between brother and sister where by the sister ties Rakhi on the wrist of brother and the brother vows to protect sister lifelong).

Differentiation in Rakshabandhan and Bhai Dooj is that in the former Sister ties as special thread on wroist of brother called Rakhi, while in Bhai Dooj, sisters pray for a long and happy life for their brothers, by performing the Tika ceremony.

On the day of the festival, ladies / girls and all sisters do a collective tika puja of Yamdivitiya and the sweets & dry fruits used in this puja is used as prasad for their brothers along with other sweets. The sisters invite their brothers for a sumptuous meal often including their favourite dishes/sweets. The whole ceremony signifies the duty of a brother to protect his sister, as well as a sister's blessings for her brother. In return brothers bless their sisters and treat them also with gifts or cash. Bhai Dooj is a time for family reunions as all brothers and sisters in the family get together. Close relatives and friends are also invited to celebrate the Bhai Dooj in many families.

The Kayastha Community also celebrates Chitragupta Puja or Dawat  Puja on this day. And it is believed that performing Choitragupta Puja in married sister’s house brings prosperity. The puja involves worship of Chitragupta bhagwan and pen, pencils, inkpots etc. used for studies. It gains its name Dawat (Inkpot) puja from the same.

Important items associated with Chitragupta in his puja include the paper and pen, ink, along with other puja items The puja is often performed to Chitragupta in reverence of the four virtues he is seen to embody: justice, peace, literacy, and knowledge. Part of the Chitragupta puja also includes writing down how much money you make in your household, and how much you need to make to survive in the following year, while making offerings of turmeric, flowers, and vermilion

The birthday of Chitragupta is celebrated on Yama Dwitiya and Chitragupta Jayanti Puja is performed on this day.

Chitragupta is a Hindu God assigned with the task of keeping complete records of actions of human beings on the earth. Upon their death, Chitragupta has the task of deciding heaven or the hell for the humans, depending on their actions on the earth. Chitragupta Maharaj (Chitragupta the King) is the patron deity of Kayasthas, a Hindu sect of India and Nepal. He is the son of Lord Brahma and holds a fairly special place in the Hindu pantheon because of the order of his birth.

Lord Brahma had many various sons and daughters in various myth structures, including many seers born of his mind, such as Vashishta, Narada, and Atri, and many sons born of his body, such as Dharma, Delusion, Lust, Death, and Bharata. The story of the birth of Chitragupta is related in different ways, but he is nearly always delineated differently from the other children of Lord Brahma, and a common thread is that he is born directly of Lord Brahma’s body.

In one popular version of the creation myth of Chitragupta, it is said that Lord Brahma gave the land of the dead over to the god Yama, also known as Dharamraj or Yamraj. Yama would become confused sometimes when dead souls would come to him, and would occasionally send the wrong souls to either heaven or hell. Lord Brahma commanded him to keep better track of everyone, and Yama declared that he could not reasonably be expected to keep track of the many people born of the eighty-four different life forms in the three worlds.

Lord Brahma, determined to solve this problem for Yama, sat in meditation for many thousands of years. Finally he opened his eyes, and a man stood before him with a pen and paper. As Chitragupta was born of Lord Brahma’s body, or kaya in Sanskrit, Brahma declared that his children would forever be known as Kayasthas. As he was first conceived in Brahma’s mind, or chitra, and then made whole in secrecy, or gupta, away from the other gods, he was named Chitragupta.

Chitragupta is sometimes also referred to as the first man to use letters, and is hailed that way in the Garud Puran. He is known as being incredibly meticulous, and with his pen and paper he tracks every action of every sentient life form, building up a record of them over the course of their life so that when they die the fate of their soul can be easily determined. These perfect and complete documents are referred to in mystical traditions as the Akashic records, and as they contain the actions of each person from birth to death, they can be said to contain every action taken in the universe.