The moment we say “Fashion” – latest designed clothes, flashy jewelry, some laces here, a torn there, out of mind innovation in looks etc. comes before the eyes. Fashion today perhaps means a trend not to be adorned by the common mass. You need to have an exceptional grit to accept the trends. And perhaps by the time you become used to and may think of adopting, the fashion would become outdated.
“The styles and customs prevalent at a given time” is the Fashion. It changes regularly and rapidly. More so – affecting the culture as a whole as the time passes.  Many such innovations have made waves in their time but withered with the progress. Bell bottom pants, Dog Collars, Tights, Ethnic Jewelry, Boots, and many such names are there in this category. All that has stayed is simple and sober. One such class of its own is the Chikan embroidery adorned clothes. This has never made waves in the market but when worn elegantly would make anyone turn and have a look.
Having its birth in the Land of Nawabs, Chikankari has become synonymous to Lucknow. Essentially a handicraft, this is the bread earner for a good population of Awadh - the old Lucknow. It is a very complex and delicate form of embroidery primarily uses muslin clothes and confined to the city of Lucknow. The term 'Chikankari' originated from the Persian word Chikan meaning muslin wrought with needlework. Thought it borrowed its name from Persian the art is totally indigenous and has nothing to do with Persia. It developed in the courts of Nawabs and Masabdars. It was adorned by Nawabs and was a mark of austerity and elegance. It was then out of reach of the common masses. After the fall of the Nawab system the artisans started searching for newer avenues and this art opened for the masses.
The design motifs in Chikan are predominantly influenced by Mughal art, similar to those in Taj Mahal and Agra Fort. Stitch is another distinctive feature. Various stitches are used in Chikankari varying according to the kind of designs and materials used. Satin stitch, stem stitch and chain stitch are some popular stitches.


Originally Chikan had very light, very soft Cotton cloth as base mostly in White. It fits to the extreme climate that this part of North India has.
Today Chikan has spread to all forms of cloths. Be it Sarees, Kurtas, Shirts, Tops, Handkerchief, Bed sheet …….anything. It has also expanded in its colour horizon. From white it first took light colour clothes as base and then spread to even gaudy shades. The most common in use is however the Sarees and the Kurtas. 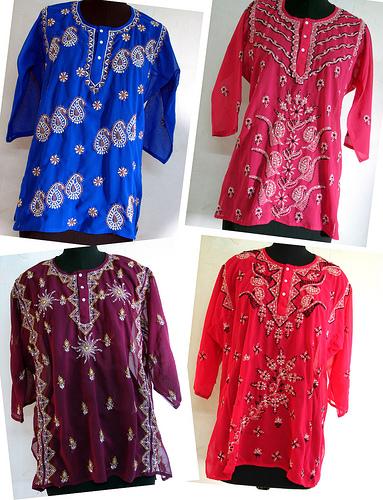 Sarees vary from simple works to heave embroidery on cotton or even chiffon. It is further made even flashy by additional sequence, jari and seep works. It thus elegantly fits both casual and party time.
Chikan Kurtas – White is its soul. The best wear for men and women both in summers. As most of the time it has cotton as the base cloth it remains a cool wear.
Such exquisitely it stands aloof, elegantly and eloquently but has never gained the fame of being in fashion. It had been there always, and stands there adorned ever, too.
- A pleasure to wear, a mark of its own to leave, and a way different to live.
- Clandestine & Pure, Serene and calm.
- An impact solid and perpetual.
- Just like itself – never to wither.

So as we say “Beauty lies in the eyes of the Beholder.” – here is the beauty in Fashion.
Aditya Sinha