Confession Of A Generation

Confession of a Generation 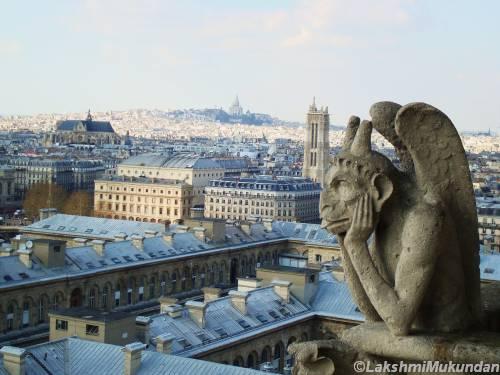 The beast opened its eyes. It had been a hundred years since he was stoned. Today was the appointed day. It fluttered its wings and took a round. The city appeared a lot different. The vegetation vasts had given way to concrete clusters. He had to judge his own experience of the whole day, he remembered. He can’t go down and move in the city like this.
He transformed himself. A tall strongly built hunk. He removed his wings and the chimneyed horns.
Contended with his looks, assured, he can now challenge any handsome as one of the most sought for bachelor, he jumped on the road to start his journey, a quest for eternity. For if he is convinced with the development over the years, he’ll get a life to share with all – out from the stone. He moved expectantly, jubilant.
The road seemed familiar. There is the big olive garden and the grape vine only a little far away, he thought. He wanted to start the day with a feast on fresh grapes.
He hurried his steps. A left turn and then a right and then left again. But green was never to appear - neither on the road-side en-route nor as an orchard aloof.
“Instead what’s this?”
- Clustered dwellings, towering overhead, piercing horizon and shielding the warmth that candidly came from Lord. He was better seated on the roof top over there under the serene abode of the divinity. At least he enjoyed his blessings uninterrupted, he thought.
He moved in search of the row of houses, with the huge groved front gardens and the vined green backyards. He might get something fresh over there. His quest to quench continued till he sensed some sweet aroma round the corner. He increased his pace. There was no green in the view. Instead, it came from a colourful edifice at the end. He entered the huge hall. It was crammed and decked, youthful and rejoicing. He followed the aroma towards the back. None seem to be bothered. There in the corner sat some future-in-making, lost in themselves.
“What are you up to”?
“We are feasting?
“I want something fresh”.
“Try this”. One of the youth passed to him a lighted cigarette.
It appeared something familiar to him of his ages. He tried a fag. “Fascinating”! He said. “But you are too young for these”.
“Oh man! We have better”. You would feel at the seventh heaven. He passed some powder to be put in the cigarette and a syringe to him.
“I am not ill. I don’t want this syringe”.
“It would give you pleasure”. And the guy helped him inject the pleasure liquid.
He felt his head go tossing, his mind swirled uncontrolled. He lay there feeling in the seventh heaven. (drugs having the control)
Suddenly, there was a jostle. All the future-in-making tried running helter and shelter. He tried too. But none had the strength to stand on his own feet. He too fell down. He was bundled in the van waiting outside.
“Stay here till your parents come for the rescue”. He was pushed in the cell along with the others.
One by one Parents came to rescue their children. The future was waiting for the past to come and help their present, he thought. He’ll have to help himself. He pleaded the cops to leave him as he had no one of his own.
The cops felt pity. They gave him some good scold and left him. He came out.
The Sun was down. He had lost the day. In the far he could see a large campus with only oldies. Hoping to get some good experience he hurried towards them. His head still tossed and the belly churned.
There were hordes of them. All in their grey years, tranquilly clad. Sitting alone or sharing silence with others. The eyes fixed on the gate – dry and hollow. Perhaps with an everlasting wait. The heart - longing. In the center, under a large Banyan tree lay a small stool, decked. A white cake as truce as the faces of these past kept on it. Atop of it – written in blood red was “Happy 100th B’day”. And there stood that b’day baby – all alone. None of the “present” whom he developed into lusturous “future” were in the reckoning. Only surrounded by written off pasts like himself.
He resembles me, he thought and moved forward towards the old man. He helped him pick the knife and cut the cake. The others surrounding wished him happiness. None wanted any long-life. All shared the cake and diffused.
The old man still stood there. His eyes were dry. -The ears yet yearning to hear the chores from his children. - His arms waiting to hold the strong hands. - His heart longing for a love. - Some pride some belongingness. The wishes appeared gory.
It was dark. He knew it was time to return to its being. The Gargoyle was waiting for him.
The world is no more a better place to live, He thought. The past has lost respect. The present has no control. And the future is endangered. How can this world continue? He couldn’t choose to be alive for ever. He would be required to return to the stone and wait for another hundred years. True to his inner self, he transformed to his self. The horns on the head, the wings awaiting flutter.
Aditya Sinha