This post is written for A to Z Challenge.
Himachal has become the cradle of development of Buddhism. Monasteries development is associated along with this development. It can thus be traced in three phases as the Buddhism itself developed in the area and is reflected in the presence of number of Monasteries in this hill state which has a mix of both very old ones and those developed recently after the arrival of Tibetans in the region.
The three phases can be traced as in the 8th century, the 10th to 14th century and then19th century onwards after advent of Dalai Lama.
First to name is the Nyingmapa Monastery. 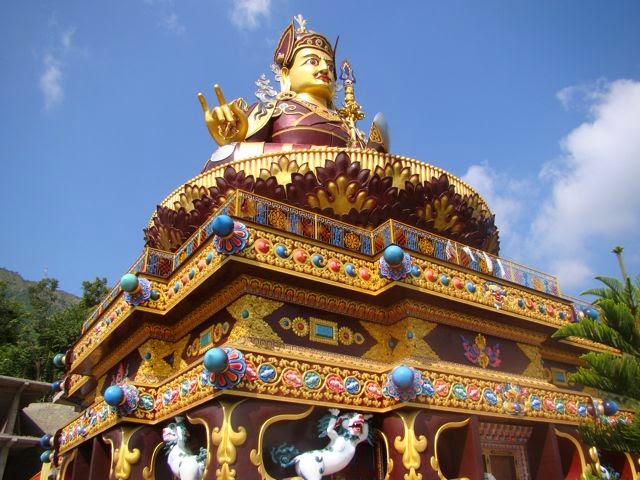 Nyingmapa Monastery, Rewalsar :is the oldest surviving monastery & is linked to earliest Buddhist transition here i.e 8th century when Guru Padmasambhava went to Tibet from Revalsar in Mandi to spread Buddhism. He was later also known as Guru Rinpoche and Second Buddha.
To commemorate Padmasmabahava,  this ancient Nyingmapa Monastery was built on the western shore of the Rewalsar lake in the Central Tibetan fashion. Two new monasteries have been built i.e.the Drigung Kargypa Monastery and Tso- Pema Ogyen Heru which have much recent constructions. The original Nyingmapa monastery has been expanded manifold into a multi-storeyed pagoda type structure, with several renovations done till the late 19th century. A large gilded statue of Padmasambahava in the formal attire as the manifestation of Guru Rinpoche is idolized here.

After the 8th century the development of Buddhism gained its pace around 10th century when the Tibetan King Yeshe Od of Guge sent 21 scholars to revive Buddhism in the Trans Himalayan region. Out of them Rinchen Zangpo was one of the survived. He built 108 monasteries out of which some still exists mainly in Lahaul & Spiti region.
Lhalung Monastery, is also known as the Sarkhang or Golden Temple. It is one of the earliest monasteries (considered second to Tabo monastery in importance) founded in Spiti valley, near the Lingti river at an altitude of  12 k ft.  It has 45 homes. A few chortens are located on the way to the monastery. It is said that the Lhalung Devta is head of all the Devtas of the valley and emerges from the Tangmar mountain beyond the village. It was a complex of nine shrines enclosed within a dilapidated wall with the main chapel richly decorated. The monastery has old ruins of several temples and an equally ancient sacred tree thus leading to the thought that this was an ancient centre of learning. Serkhang, the golden hall of the temple complex is studded with images of 51 deities.
Nako Gompa, Kinnaur is also located at 12k ft near the Indo-China border in the trans-Himalayan region in nako village in Kinnaur District. The monastery complex in the village has four temples in an enclosure built with mud walls. The area is also known for the Nako Lake which forms part of the border of the village.
Though the monastery complex looks simple from outside, in the interiors of the complex, the wall paintings in the monastery are delicately executed. Influence of the Ajanta style of painting, is distinct “in the tonal variation of body hues to produce an effect of light and shade”. The elegant divine figures have placid expressions, a reflection of the finest classical art of India.
The four temples are well preserved; the main temple and the upper temple considered the oldest of the four structures have the original clay sculptures, murals and ceiling panels. An impression of a foot found near the Nako Lake is ascribed to Guru Padmasambhava In a nearby village called Tashigang, several caves are found where it is said Guru Padmasambhava meditated and gave discourse to his disciples.
Tabo Monastery, Spiti – Also called the “Ajanta of the Himalayas”  is considered the oldest monastery in Himachal Pradesh in original form. It is located at the southern edge of the Trans Himalayan plateau in the Spiti Valley on the banks of the Spiti river, in the very arid, cold and rocky area at an altitude 10 k ft. The monastery, spreads over 6k sq m and has nine theme based temples out of which the first four are considered the oldest temples while the others were later additions. A number of caves carved into the cliff face are located above the monastery, which are used by monks for meditation. The monastery is studded with large collection of precious Thangka -scroll paintings, manuscripts, well-preserved statues, frescos and extensive murals that cover almost every wall. The monastery is a national historic treasure of India and preserved by the ASI.
It is a World Heritage Site listed by UNESCO and stands second only to the Tholing Monastery in Tibet in sanctity.
Key Gompa, Spiti over the the Spiti river is considered as the biggest monastery in Spiti valley and is at a height of 13.6k ft. It has a rich collection of ancient murals and books. There are three floors, the first one is mainly underground and used for storage. One room, called the Tangyur is richly painted with murals. The ground floor has the beautifully decorated Assembly Hall and cells for monks.
Later by followers of Zangpo many other Monasteries were built which are amongst the famous to today like –
Gandhola Monastery or Guru Ghantal Monastery is a cave type monastery at Gandhala has been inferred from a copper pot.
Trilokinath temple approx 40 km from Keylong towards Udaipur is a center worshiped by both Buddhist and Hindus. The Triloki Nath Temple and Guru Ghantal are beyond Rohtang Pass and are considered classical Buddhist shrines of Indian Buddhism.
Shashur or Sashur Monastery is a Buddhist monastery located 37 kilometres from Manali towards Keylong . It is so named after "Sha-shur"  meaning "blue pines" in the local dialect. Patches of blue pine can be seen around the monastery. This monastery was built in the 17th century. 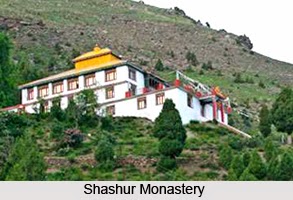 Bir Monastery: Bir is a small village of Tibetan refugee some 10 kms from Baijnath in Kangra district famous for Paragliding.Pema Ewam Chögar Gyurme Ling Monastery is developed here over the ages.

After this phase the Buddhist further developed after the shift of the 14th Dalai Lama (Tenzing Gyatso) to Dharamshala owing to the exile in 1959. The Namgyal Monastery in McLeod Ganj, Dharamshala is
the personal Monastery of Dalai Lama and is named so after the original Namgyal Monastery in Tibet.
Since then Dharamshala has become the nerve center of Tibetan Buddhism with and the Tibetan refugees have established more than 40 monasteries of their sects, such as the Gelukpa, Sakyapa, Kargyupa, Nyingmapa, Chonangpa and Dragung-Kargyupa in this region.
Aside from Namgyal other important are :
Tsuglagkhang also known as Dalai Lama Temple is in McLeod Ganj and has Buddhist shrine in stting postuer of Shakya muni, Avalokitesvara, and Padmasambhava. The monastery is located opposite to the Namgyal Monastery in the same courtyard.
Ganchen Kyishong or Gompa Dip Tse Chok Ling is at Sidhpur in main Dharamshala town. It is   a small monastery.
The Norbolingka Institute situated in Sdhbari in Dharamshala was founded in 1988, by the present Dalai Lama has the primary objective of preserving the Tibetan language and cultural heritage. This institute has been patterned on the same lines as Norbulingka, the traditional summer residence of the Dalai Lamas, in Lhasa, amidst a well-maintained garden setting, and the emphasis here is more on traditional art. A temple named as the “Seat of Happiness Temple” (Deden Tsuglakhang) is located here. Around this temple, craft centres are located, which specialise in traditional forms of Thanka painting to Metal art that are considered integral to Tibetan Monastery architecture. 300 artisans work here and also impart training to their wards.
The Losel Doll Museum here has diorama displays of traditional Tibetan scenes, using miniature Tibetan dolls in traditional costumes.


Kalachakra Temple is located adjoining to the Tsulagkhang which is dedicated to the Kalchakra. The temple has fresco decorations of 722 deities of the mandala, Shakayamuni Buddha, and the central Kalachakra image. Dalai Lama personally directed the painting of the frescos done by three master painters over a period of three years. The walls and columns here have many traditional Tibetan Thangka paintings.
Himachal has numerous of such Monasteries and I have just thrown light on some. That's for today. Tomorrow I would talk about O.