A for Anant Chaturdashi & Akshay Tritiya 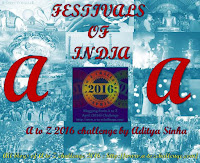 Akshay Tritiya a festival linked prosperity & normally falls in April – May, the third day of Bright Half of the Hindu calendar month Vaishakha and is a celebrated across India. It has business relevance where in jewellery / vehicles etc. bought on that day is referred auspicious and expected to stay life long and give good returns. This is famous. This year it falls on 9th May.

Anant Chaturdashi on the other hand is the lesser known one so I’ll talk more about this.

We as kids reluctantly used to go / accompany elders to the local temple priest performing this puja with our PUJA THALI adorned with Anant Thread, a cucumber, milk and seasonal fruits.  “Anant Bhagwan Millatthoo” the Pandiji’s (Priest’s) repeated query in this puja still reverberates and brings a smile on the face.
Hindu Relevance & Story Linked:
Anant Chaturdashi as in the name “Chaturdashi” falls on the 14th day of Lunar Fortnight of Bhado month of Hindi Calender (Aug - Sep by Georgian Calender). It normally falls after 10 days of Ganesh Chaturthi. The festival is celebrated by Jain and Hindus with different stories behind it. This year it will fall in September.
Story behind the belief is as any other story in Hindu Mythology – there was a Brahmin couple Sushila & Kaundinya who saw this puja by some villagers and the wife started performing the same, In process they prospered. One day the husband came to know about this and destroyed the “Anant String” of this puja. As a result there reduced to pauper. He realized his mistake and did penance and in return the situation got reversed. Thus started the festival of “Anant Chaturdashi” & people started tying “Anant String with 14 knots for 14 days starting Chaturdashi of Vaisakh” month of Hindu Calendar.
Celebration:
The festival amongst Hindus is mostly celebrated in parts of Bihar and Eastern UP, wherein Anant thread is tied on the right arm above the elbow by men and removed after fourteen days. (Women tie this on their left arm). 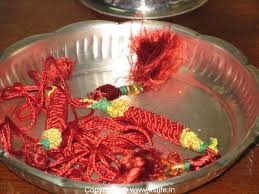 As the story of Anant (supposed to be an avatar of Lord Vishnu) is linked with Lord Vishnu, a pot of Milk is referred as kshirsagar (Ocean of Milk) and Lord Vishnu's Anant Roopa is searched in this milk pot with story, shlokas and offerings.  The Anant (sacred string with fourteen knots) is wrapped on a cucumber and is swirled five times in this "Ocean of Milk" ( and the Priest asks Did you find Lord Anant (anant bhagwan millatthoo – in local dilect) to which you have to answer yes on the fifth time. Fourteen tilaks, fourteen puris, puas, are offered  Milk is developed as Panchamrit(Mix of Milk, Curd, Jaggery, Honey and Ghee) symbolizing kshirsagar (Ocean of Milk) After the puja the thread or Anant is tied on the right arm above the elbow by men. (Women tie this on their left arm.) This Anant thread is removed after fourteen days. Puri, Sewai (vermicelli) & vegetable made of Kanda is especially made on that day.
Anant Chaturdashi is also the last day of the Hindu festival of Ganeshutsav. It is generally the tenth or eleventh day after Ganesh Chaturthi, and all the Lord Ganesha idols brought into homes and communities are immersed in the sea or nearby lakes and rivers. On this day, people travel to the waterfront with the idols, large and small, dancing and singing in large processions. Lord Ganesha is departed, only to be welcomed the next year with equal excitement. This is normally prevalent in Maharashtra.
Jains observe Paryushana in the last 10 days of the Bhado month of Hindi Calender, Anant Chaturdashi, also known as Anant Chaudas is the last day of Paryushana. Kshamavani, the day the Jains ask for forgiveness for any mistakes they have made intentionally or otherwise, is observed one day after Anant Chaturdashi.
Aditya Sinha
01.04.2016

That’s for today with A. Tomorrow it would be another festival with “B”
For my parallel second Challenge blog with A pls visit : Let the Soul Pour
For other A to Z challenge blogs visit : A to Z Challenge 2016