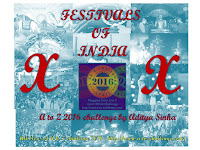 XMAS or Christmas is one of the most important festivals of Christians across the world and celebrates the birth of Jesus Christ and conveys his message of love, tolerance and brotherhood. It is a celebration of humanity and mankind. Though Christmas is a primary festival of the Christian calendar, it still has a special significance in everyone's life. It is celebrated as a universal festival throughout the nation. The first mention of 25th December as the birth date of Jesus occurred in 336 AD in an early Roman calendar. That day onwards, this date is celebrated as the birth date of Jesus. In India, this festival has a special significance since India is known for its unity in diversity worldwide. The celebration of Christmas shows that even people from different religions can take part in Christmas celebration. The day is also called Bara Din or BIG DAY.

People decorate their homes to the hilt with Christmas trees or Xmas tree wreathes with bright red decorative bulbs, bells and other small trinkets. People hang beautiful star-shaped paper lamps of various colours and sizes outside their homes.

Nearly a week before Christmas, the church, club and school choirs start doing the rounds of their neighbourhood and are greeted by people with cakes and other eatables. Christmas carols are sung in the praise of Lord Jesus Christ.

Churches hold a special 'midnight mass', attended by most people of the community. People especially look forward to this mass as this is not only a sacred prayer ceremony but an important social event as well. Men and women dress up in new clothes for taking part in the mass-special prayer session. The mass goes on for over a couple of hours and people fondly remember the 'Saviour' who gave up his life so that they may live.

After the mass, people head off home on this hallowed night and children gambol on their way back, burning sparklers and bursting loads of crackers. Everyone sleeps with a peaceful easy feeling, as the next morning brings with it, the Big Day! On Christmas Day, people get ready for the biggest feast. Relatives and friends visit and wish each other by saying 'Happy Christmas' or 'Merry Christmas' and eat the haute cuisine especially prepared for the occasion. The entire Christian community gets together to have a jolly good time.

The delicious cake prepared especially for this occasion with rich addition of dry fruits is served to the guests along with other delicacies.

The celebrations continue for a fortnight and ends in the first week of January. The churches whitewashed and decorated especially for this grand gala festival capture the attention of hundreds and thousands of people who visit these churches in large numbers. Though, Christmas comes to an end, it leaves people with more memories to cherish every year. Another common character synonymous with Christmas celebration is Santa Claus and distribution of gifts to children.

Why is Christmas abbreviated as Xmas:

Xmas is a common abbreviation of the word Christmas. The "X" comes from the Greek letter Chi, which is the first letter of the Greek word Χριστός, which in English is "Christ". The "-mas" part is from the Latin-derived Old English word for Mass.

That’s for today with X. Tomorrow it would be with Y.