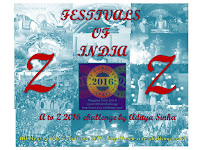 Zagor is an age old traditional festival in Siolim area of Goa, in which Hindus and Christians jointly celebrate the harvest.

Siolim is a small hamlet thirty minutes away from the famous Calangute beach of Goa, On the first Monday after Christmas, Hindu and Christian residents of the waddo, or hamlet, of Dando congregate on an open plot of land to keep a night-long vigil and appease the deity who is believed to protect the village. The zagor, or wake, begins with prayers that are unmistakably Christian, though the sing-song chants are said to have been drawn from the abhangs of Sant Tukaram, Maharashtra's poet-saint. And the wizened priest leading the congregation is a Hindu villager from the toddy-tapper caste who does this just once a year.

The main priests' annual ritual is preceded by 40 days of abstinence when he stays away from non-vegetarian food and prepares for the zagor with prayers and rehearsals with the villagers. The proceedings begin with a procession from the house of his neighbours, with a coconut ritually offered to the deity. The procession halts at wayside crosses and Hindu shrines, including St Annae's chapel. Traditionally, three hymns are sung by Hindus and Christians at the chapel before the procession moves on. Then the Hindus make offerings of oil while the Catholics offer candles at the chapel.
At prayers before Zagorio, as the formless deity is called, the priest offers salutations to the unity of the Father, Son and Holy Ghost. The ritual five hymns are followed by traditional dances and folk theatre enacted by the villagers, hereditary participants whose roles are inherited through generations which marks the essence of the main celebration. Principal characters like the firangi-raja (white lord), mali (gardener), malin (gardener's wife), mahar (untouchable), etc, represent Goan society as it evolved through the years.

The all-night vigil is also helped by the Konkani tiatr, or theatre, where skits on political and social issues are performed.

People offer oil, candles and even cigarettes and feni (a local intoxicant) in thanksgiving. The khazan-style of agriculture unique to this region enables paddy cultivation, Pisciculture and salt manufacture on the same land, by regulating the ingress of seawater.

With the Siolim zagor now firmly on the tourist agenda, hereditary participants in the zagor have money in their pockets. The festival is now facing its problem with communism and moving towards extinction. Growing prosperity, though, poses a bigger danger. With the spread of education, entire Catholic families are migrating out thereby altering the colour of the zagor.

That’s for today with Z.

So I have cleared the challenge ---- HURRAH !