A to Z challenge 2016
Festivals of India 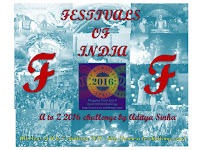 Festival of breaking of the fast is commonly called EID or Eid al-Fitr / Id al-Fiṭr. It is an important religious holiday celebrated by Muslims worldwide that marks the end of Ramadan, the Islamic holy month of fasting (sawm). The religious Eid is a single day during which Muslims are not permitted to fast. The holiday celebrates the conclusion of the 29 or 30 days of dawn-to-sunset fasting during the entire month of Ramadan. The day of Eid, therefore, falls on the first day of the month of Shawwal. The date for the start of any lunar Hijri month varies based on the observation of new moon by local religious authorities, so the exact day of celebration varies by locality. However, in most countries, it is generally celebrated on the same day as Saudi Arabia. Traditionally, it is the day (beginning at sunset) of the first sighting of the crescent moon shortly after sunset. If the moon is not observed immediately after the 29th day of the previous lunar month (either because clouds block its view or because the western sky is still too bright when the moon sets), then it is the following day.

We had shifted to our new house from our parental house which was a new developing area surrounded by Muslim colony. With very few houses in our colony, the whole colony used to be a playground for the entire locality and thus developed our new friends. Come any festival time the whole area appeared as a small India. In Eid it was everyone moving in white Kurta Pyjama, esp. we as youngsters moving in groups to all Muslim friend’s houses and celebrating Eid with lots of Sewaiyan. Same was the in HOLI when all of them used to move along with us in tolis to colour others. The memories are fresh and a real character builder.

Significance of Ramadan and EID:

Ramadan is a period of fasting, reflection, devotion, generosity and sacrifice observed by Muslims around the world. While major holidays of other faiths have largely become commercialized events, Ramadan retains its intense spiritual meaning.
The word "Ramadan" comes from the Arabic root word for "parched thirst" and "sun-baked ground." Muslims across spend the whole month of Ramadan fasting from dawn to sunset. Thus it is expressive of the hunger and thirst felt by those who spend the month in fasting. As opposed to other festivals when people often indulge in rejoice, Ramadan is by nature a time of sacrifice. Through fasting it refers to their experience of hunger and thirst, and thus sympathizes with those in the world who have little to eat every day. It is supposed that through increased devotion, one feel closer to their Creator, and recognises that everything we have in this life is his blessing. Further through increased charity, it is implied to develop feelings of generosity and good-will toward others. The Prophet Muhammad (peace be upon him) once said, "A man's wealth is never diminished by charity."

Ramadan is a very special time for Muslims, and the feelings and lessons are implied to stay with us throughout the year. In the Qur'an, Muslims are commanded to fast so that they may "learn self-restraint".  This restraint and devotion is especially felt during Ramadan.

So after the pious month of Ramadan & fasting thereof EID is celebrated on the first day of the following month in Islamic calendar. It is a time to give in charity to those in need, and celebrate with family and friends the completion of a month of blessings and joy.

On the day of Eid, Muslims gather early in the morning in outdoor locations or mosques to perform the Eid prayer. This consists of a sermon followed by a short congregational prayer. Muslims wake up early in the morning—always before sunrise— offer Salatul Fajr (the pre-sunrise prayer), and in keeping with the traditions of the Prophet Muhammad clean their teeth, take a shower before prayers, put on new clothes (or the best available), and apply perfume. It is forbidden to fast on the Day of Eid. It is customary to acknowledge this with a small sweet breakfast, preferably of Date (fruit), before attending a special Eid prayer.

After the Eid prayer, Muslims visit various family and friends, give gifts (especially to children called EIdi) and exchange wishes. The festival involves various variety of “Sewaiyan” (vermicelli) aside from other relishing cuisines. These activities traditionally continue for three days. In most Muslim countries, the entire 3-day period is an official government/school holiday.

Through changing routines, Muslims have a chance to establish a healthy lifestyle habits -- particularly with regards to diet and smoking.

Through family and community gatherings, Muslims strengthen the bonds of brotherhood and sisterhood, in their own communities and throughout the world.

Note: Hope I have given justice to the festivals details. If anyone wants to add or point out anything, pls. feel free to mention in the Comment.


That’s for today with F. Tomorrow it would be another festival with “G”
List of Other Festivals : Anant Chaturdashi, Akshay Tritiya ,Buddha Purnima, Basant Panchmi, Baisakhi,  Chhatha, Diwali/Deepawali, Easter