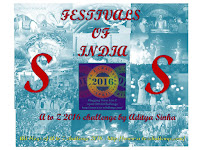 SIMHASTHA or Ujjain Simhastha is a Hindu religious fair held every 12 years in the Ujjain city of Madhya Pradesh, India famous for Mahakaleshwar Mandir devote to Lord Shiva. The name derives from the fact that it is held when the Jupiter is in Leo. (Simha in Hindu astrology).

After 12 years Sinhastha is starting today on 22nd April 2016 with the first Holy bath in River Shipra, Ujjain. It would continue till 21st May 2016 with other Holy baths on different important dates as mentioned in the photo below. 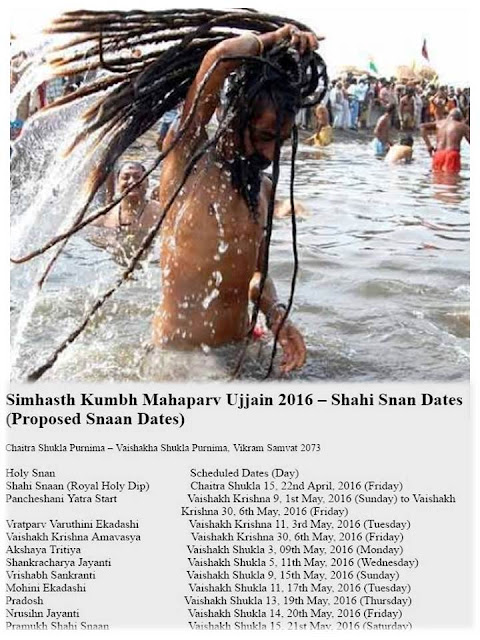 It is one of the four fairs traditionally recognized as Kumbha Melas, and is also known as Ujjain Kumbh Mela. According to Hindu mythology, Vishnu dropped drops of amrita (the drink of immortality) at four places, while transporting it in a kumbha (pot). These four places were Haridwar, Allahabad, Ujjain & Nasik as the present-day sites & thus form the centers of Kumbh Mela.

Kumbh Mela or Kumbha Mela is a mass Hindu pilgrimage of faith in which Hindus gather to bathe in a sacred river and is held every 12 years at each of the four sites.  Traditionally, four fairs are widely recognized as the Kumbh Melas: the Haridwar Kumbh Mela, the Allahabad Kumbh Mela, the Nashik-Trimbakeshwar Simhastha and the Ujjain Simhastha. These four fairs are held periodically at one of the following places by rotation The main festival site is located on the banks of a river the Ganges (Ganga) at Haridwar; the confluence (Sangam) of the Ganges and the Yamuna and the now extinct (disappeared/ dried/ lost in time) Sarasvati at Allahabad; the Godavari at Nashik; and the Shipra at Ujjain. Bathing in these rivers is thought to cleanse a person of all sins. The exact date is determined according to a combination of zodiac positions of the Jupiter, the Sun and the Moon. At Nashik and Ujjain, the Mela may be held while a planet is in Leo (Simha in Hindu astrology); in this case, it is also known as Simhastha. At Haridwar and Allahabad, an Ardha ("Half") Kumbh Mela is held every sixth year; a Maha ("Great") Kumbh Mela occurs after 144 years.

The festival is one of the largest peaceful gatherings in the world, and considered as the "world's largest congregation of religious pilgrims". An estimated 120 million people visited Maha Kumbh Mela in 2013 in Allahabad. This year Simhastha is expected to be visited by 5 crore pilgrims over the month-long period.

According to medieval Hindu mythology, the origin of the festival can be found in the ancient legend of samudra manthan. The legend tells of a battle between the Devas and Asuras for amrita, the drink of immortality. During samudra manthan, or churning of the ocean, amrita was produced and placed in a kumbha (pot). To prevent the asuras (malevolent beings) from seizing the amrita, a divine carrier flew away with the pot. In one version of the legend, the carrier of the kumbha is the divine physician Dhanavantari, who stops at four places where the Kumbh Mela is celebrated. In other re-tellings, the carrier is Garuda, Indra or Mohini, who spills the amrita at four places.

In its current form, Sinhastha began in the 18th century when the Maratha ruler Ranoji Shinde invited ascetics from Nashik to Ujjain's local festival. Both Ujjain and Nashik fairs adopted the Kumbha myth from the Haridwar Kumbh Mela.

For more details of the festival one can visit this year’s official website : http://www.simhasthujjain.in/