U for Ullambana or Ghost Festival 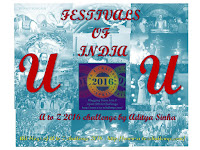 Ullambana, or the Ghost Festival, is the most popular festival celebrated by Buddhists in different countries including China, Japan, India, Thailand, Malaysia and others. On this day, it is believed that the "Gates of the Hell" are opened and the dead souls pay visit to their loved ones. During this festival, offerings are made to the spirits of the dead and to the hungry ghosts, in order to bring good fortune and luck. It is celebrated on the 15th day of the 7th month of the lunar calendar. Ullambana is a festival of liberation, which advocates and reinforces the concept of filial piety – Ullambana Sutra. The word ‘Ullambana' means ‘deliverance from suffering', and specifically refers to the salvation that is granted to tormented souls in hell. The festival is known as Ching Ming Jie in Singapore, O-Bon in Japan and Vu Lan in Vietnam and by different names in other countries.

The Ullambana Sutra is a Mahayana sutra which consists in a brief discourse given by the Gautama Buddha principally to the monk Maudgalyayana on the practice of filial piety. Its further believed that the sutra was translated from the Sanskrit by Dharmarakṣa.

The Buddhist origins of the Ullambana Festival can be traced back to a story that originally came from India. As per the story Buddha taught Mahāmaudgalyāyana to help his mother who was suffering in the lower realm of the Hungry Ghosts.

Mahāmaudgalyāyana was a well-to-do merchant who had given up his trade to become one of the Buddha's chief disciples. After he attained arhatship, he thought of his parents and wondered what happened to them. He travelled over the known Buddhist universe, and found his father in heaven. However, his mother was reborn in a lower realm, known as the Realm of Hungry Ghosts. His mother had taken on the form of a hungry ghost. It could not eat because its throat was very thin and no food could pass through, yet it was always hungry because it had a fat belly. His mother had become greedy with the money he had left her. He had instructed her to kindly offer dana to any Buddhist monks that ever came her way, but instead she withheld her kindness and her money. It was for this reason she was reborn in the Realm of Hungry Ghosts.

Thus on this day, Buddhists offer prayers both to their departed forefathers and to their living parents and elders. It is generally believed that one who performs a good deed accumulates spiritual merit. It is considered an even more pious act when the merit earned is shared with departed souls. This act helps the dead to be reborn in good realms and alleviate his/her suffering. Ullambana is celebrated by Buddhists all over the world. Though there are slight variations in certain customs and beliefs in different countries, the fundamental rituals remain essentially the same. Besides offering prayers to the souls of deceased ancestors and welfare of their parents, people carry offerings, such as food, medicine and clothes, for monks and nuns in monasteries..

Fourteen days after the festival, to make sure all the hungry ghosts find their way back to hell, people float water lanterns and set them outside their houses. These lanterns are made by setting a lotus flower-shaped lantern on a paper boat. The lanterns are used to direct the ghosts back to the underworld, and when they go out, it symbolizes that they have found their way back.