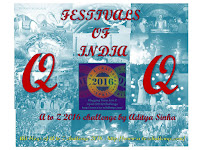 Writing on Festivals of India has led to some astonishing revelations. No doubt we know that India is a land of diversity and so does appear in all its aspects. I was astonished with the number of festivals that I came across.

If I say there is more number of festivals than the number of days in the year – I would not be wrong.  To summarise I have tried to put it as following 10 points.

These are just some and can go on unending as we research more and more .