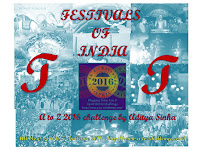 "Teej" refers to the "third" day that falls every month after the new moon (Amavasya), and the third day after the full moon night of every month. The monsoon festivals of Teej  are of three types varying as per regions and days viz.

Haryali Teej: Third day of the bright half of the lunar month of Shraavana.

Kajari Teej: the third day of the dark fortnight of Bhadrapada.

Hartalika Teej: third day of the bright half of Bhadrapada.
They fall in July/August/September.

Thus Teej is a generic name of the festival celebrated across Nepal & Northern and Western India as Haryali Teej, Kajari Teej and Hartalika Teej & welcomes the monsoon season. It is celebrated by girls and women, with songs, dancing and prayer rituals primarily dedicated to Goddess Parvati and her union with Lord Shiva.

The festivals celebrate the bounty of nature, arrival of clouds and rain, greenery and birds with social activity, rituals and customs. Getting together with friends and telling stories, dressing up with henna-coloured hands and feet, wearing red, green or yellow clothes, sharing festive foods, and playing under trees on swings are other integral part. A fast is kept by women.

Haryali Teej : The traditional areas are Punjab, Haryana, Chandigarh and Rajasthan where it is celebrated with dance Gidda, & married women visiting their families and receiving gifts. It is also traditional for women to ride on swings. In-laws, husbands and other family members give gifts, typically new clothes and accessories, to girls and women. Boys fly kites. prepare churma and sweets especially ghevar at their home. Fasting is kept for longevity of husband.

Kajari Teej : Women in Uttar Pradesh pray to Lord Shiva on Kajari Teej. Here too it is customary to sing folk songs known as kajris. The focus of the lyrics is usually on separation expressing the pining of a woman for her beloved in her parents' home, where she has been sent to celebrate teej, or waiting in anticipation to be collected by brothers to celebrate teej. The kajri is a folk song composed and sung in the regions of eastern Uttar Pradesh, Bihar and in parts of Rajasthan. Women who observe the kajari teej fast go without food and water. 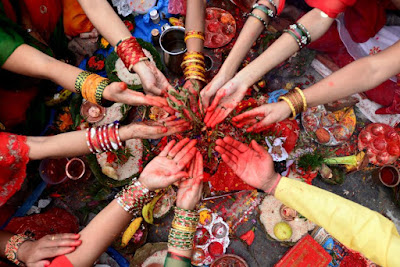 Accordingly, Hartalika Teej is seen as a major festival. The festival has women feasting during the evening of Hartalika Teej, praying to Goddess Parvati and Lord Shiva, remembering their wedding and staying up all night listening to prayers. The fast (also called nishivasar nirjala vrat) commences during the evening of Hartalika Teej and is broken the next day after a full day's observance which involves women not even drinking water. The focus is on praying to Goddess Parvati whom Shiva desired should be worshipped under the name Hartalika. The main areas of celebration are Rajasthan, Uttar Pradesh, Uttarakhand, Bihar and Jharkhand. In Rajasthan, an idol of Goddess Parvati is taken out in procession in the streets accompanied by singing, and music. The Hartalika Teej festival has also spread to parts of Madhya Pradesh where it is celebrated as a minor festival.