ATL-BTL-TTL - Strategy in a slow market

There was a time when Sales as a concept and practice got being considered ineffective and insufficient. The concept with longer relationship with customer approach - gained the importance. Thus, got the  Marketing concept its being. Slowly, this became the integral and most important part of the strategy and the prime tool while devising a plan for revenue generation. The increase in competition, the globalization, economic growth and recession all has played its role and made the process richer and complexer each day. Among the multiple facets that form the wings of this approach, brand promotion is one that too has grown in the ways of implementation and has seen fortuned innovations.

With the advent of the present century, the existing tug of war between  advertising and sales promotion took a new shape and came the concepts Above - The- Line and Below - The- Line activities (ATL and BTL) widening both scope and intensity of this war.
The ATL or above-the-line propagated traditional marketing channels that strived to reach a mass audience with messages that reinforce a brand communicate general product information or inspire an emotional response.
i.e. ATL focuses on
- Mass Reach
- It creates Brand Awareness
- And has no direct consumer involvement.
It thus has the vehicles like: Print Advertising, Hoardings, Electronic Channels and the Radios.
While the “Below-the-line” initiatives, by comparison, acted like traditional direct marketing efforts – they aspired to establish targeted relationships between marketers and individual consumers, and offer comparable ease in measurability.
i.e. BTL
-is consumer defined .
-    It generates Trial.
-    and has direct consumer involvement.
It thus has vehicles like Events, Road Shows, Dealer level activities, Consumer contacts, Mobiles etc. Sometimes the same vehicles can act as both BTL and ATL activity complementing each other e.g. Dealer Board.The concept of BTL was however; fresh and resulted though smaller in size was more decipherable. It thus, started making its way in the brand promotion strategies. It started eating the budgets of the ATL activities. From negligible, to sizable. Until the mid of 2008 where in the economy of the world was upbeat, and growth triumphant, this new arena was being welcomed as a forward integration of the concept. With increased fragmentations and demographics along with the growing pressure to promote effectiveness of marketing communication BTL activities was giving the apt answers and so it started prospering. A separate budget started being devoted to it. The world (especially the growing economy started seeing a growth in the BTL along with the ATL budgets. It started complementing the ATL. More recently, agencies and clients had switched to an 'Integrated Communication Approach.' BTL was a common technique used for "touch and feel" products (consumer items where the customer would rely on immediate information rather than previously researched items). BTL techniques ensured recall of the brand while at the same time highlighting the features of the product.
But then came the period of recession in 2009. Companies - trying to cut on the expenditure. Amongst the many heads of budget that came into strict revision the promotion, too started being looked as the expenditure rather than the investment. And then came the real tug of war between the two. Should the age old ATL be retained under these tough conditions or the newer approach BTL be considered as the new lease of life. Obviously, the ATL that encompasses a higher budget got a pause for the time being. The BTL with lower per event cost kept the promotional plan rolling in those hours. And the century kept seeing a steady growth in the BTL expenditures over the year. The worry among the media people thus was.... for how long?
No situation stays forever. So was the case with recession. Once the festival period in India in 2009 came and the different segments saw things rolling. BTL, which had been constant throughout, kept seeing a steady growth in expenditures. With its unique ability to personalize and customize communication this form of communication started penetrating metros to cities and to rurals. The ATL, which had seen a cut in the past few months, got a lease of life. The BTL that had slowly started replacing the mass media advertising again started seeing it back among the masses.
Such recent trends of future has a common term being used by savvy media sales persons i.e. Through The Line approach, which according to Altaf Jasnaik, has been around forever but under a new named coined for media men is called the TTL approach. The TTL (Through the line ) approach is where a mix of the two (ATL+BTL)  along with the new technology i.e social media and web/ mobile technology are used to integrate a marketers efforts and optimize returns from these separate investments. 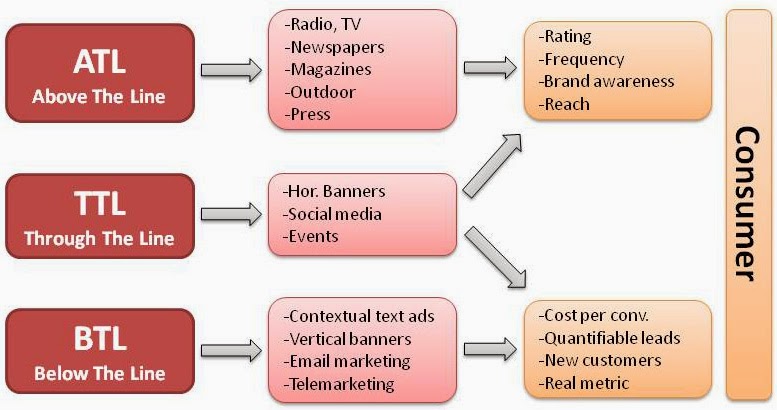 More recently however the TTL approach has gained attention with more weight shifting to integrated BTL and focus thus moving to this side of the fulcrum. The idea remained to optimize the ROI on marketing budget spent, by focusing ones energy on winning smaller yet more crucial BTL battles than ATL wars which were being raged by Sponsorship and logo positioning crazy big spenders.
In a nutshell, while Above-the-Line promotions are tailored for a mass audience, BTL promotions are targeted at individuals according to their needs or preferences. While Above-the-Line promotions can establish brand identity, BTL can actually lead to a sale. Above-the-line promotions are also somewhat impossible to measure well, while BTL promotions are highly measurable, giving marketers valuable insights into their return-on-investment. The dynamic market conditions force the brand managers to stay on toes and proportion their budget accordingly.
Now when in this year too, as  the market is expected to still behave better, we expect the budgets being re-vitalized. With the new fiscal year also approaching,   the policies for budget plans by media and brand experts is of immense importance. The study reflects that BTL now gaining its importance would surely form an integral part of the plans but integrated and well coupled with extensive ATL plans. A proper mix i.e. TTL and apt utilization of all the vehicles are expected to form the successful means of promotion in the coming years. But, this would also mean a constant innovation and newness in the approach and hordes of brainstorming in store for all.