Visit Parijaat - Accomplish your wish
India is a land of diversity. It stands true even for the beliefs and faiths that we have. Mythology and history has left many a stories that make us even pray stones, leaves , trees ...... anything. One such belief is for the age old tree - The Parijaat tree at a small village Kintur in Barabanki some 50 kms away from the city of Nawabs Lucknow. The tree is believed to be brought from heaven and the only one available on earth. (Pls. no questions about its genuinity -- its a belief and that's it.)

So these were the beliefs and we were forced to have a closer look.  Reaching the site - our eyes remained open. The tree atleast was really gigantic and seemed to be very old. The following as narrated by locals made the visit worth.

The tree :
The age of this tree is believed to be 1000 to 5000 years. The perimeter of the trunk was around 50 feet and height around 45 feet. The leaves of the tree in the lower portion have five tips like the fingers of a hand, while at the upper reaches it has seven. Its flowers are very beautiful and white in colour, on drying out it takes on golden tinge. The flowers have five petals. The tree blossoms very occasionally, with very few flowers, mostly around the 'Ganga Dashehra', and spreads its fragrance far and wide. 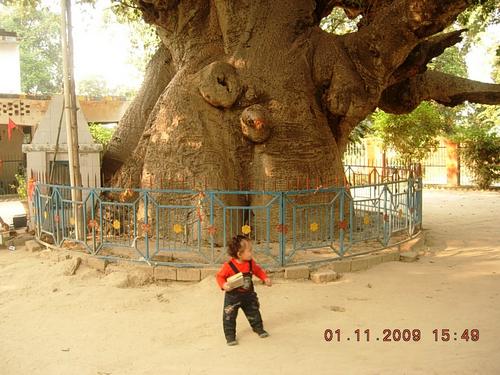 The locals consider it to be their protector and obliging, henceforth they protect its leaves and flowers at all costs. The leaf, the flowers, the trunk whatever falls on the ground is protected. Strictly no body is allowed to touch the tree or pluck flowers, leaves or twigs from it. Local people hold it in high esteem, in addition to the large number of tourists who visit to see this unique tree. On request and some donation for daily Aarti the Pujari would give you one dry Parijaat flower , which you can keep in your "tijori" and would bring prosperity all round.

(Notice the flower at the center) 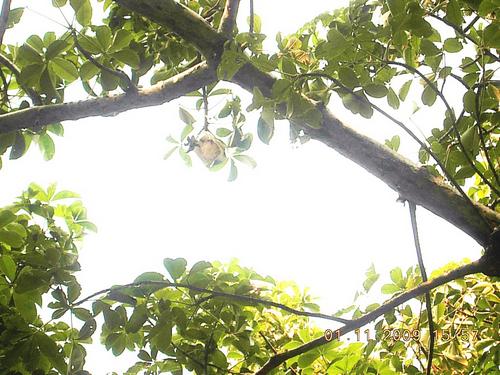 On a close look at the tree, you can find figures of animals that has carved out of the main trunk or the branches. Notice the face of a roaring Lion, Elephant, Lord Ganesh, etc.
(The Elephant Face) 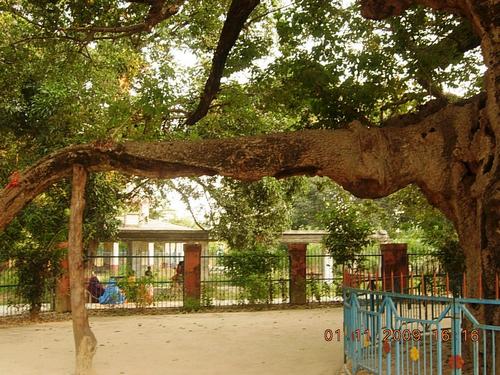 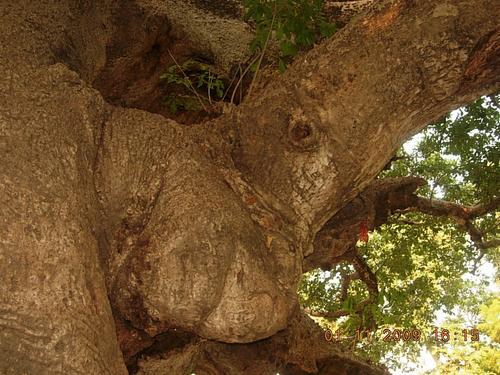 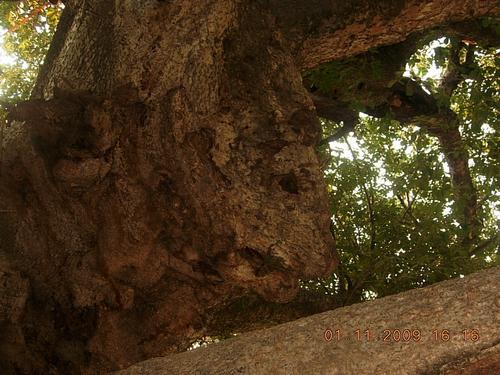 Beliefs behind its existence:
“Parijaat tree” at Kintur is considered to be a divine tree. Mythology offers different stories  about its origin at such a remote place - Kintur (which gots its name from KUNTI – mother of the Pandavas of epic Mahabharata) is about 50 kms away from Lucknow.
According to one belief Arjuna brought it from Heaven : It stands that Kunti used to offer the Parijaat flowers to Lord Shiva during her daily prayers brought by Sun God every morning from heaven. But this did not happen on one cloudy day and Kunti got worried. Thus, Arjuna brought it from Indra’s garden in heaven and planted it near the Shiva temple where Kunti used to offer prayer. (The Kunteshvar Shiv temple is just half a km away from this site.)
Another famous story says that Krishna brought it for Satyabhama: Lord Krishna's wife Satyabhama saw the Parijat tree, and got fascinated. So, Krishna brought it from heaven for her after fighting a fierce battle with Lord Indra, the king of the heaven. Krishna brought the tree to his capital Dwarka and planted it near Satyabhama's palace. This made his other queen, Rukmini, jealous and angry, so Krishna asked Narad to bring some Parijat flowers from heaven which he presented to Rukmini. This did not satisfy Rukmini so Krishna devised a trick by which though the tree remained near Satyabhama's palace, its flowers began to fall in front of Rukmini's palace.
This story has another bend where it is believed that when Krishna after killing demon Narakasura, went to heaven to return the stolen ear-rings of the mother of gods, Aditi, she got pleased and thus Indra gifted the Parijaat tree to Satyabhama, his wife who had accompanied and assisted him in the campaign and killing the demon. Satyabhama insisted that the tree be planted near her palace. But in the morning, she got surprised to see the flowers scattered near Rukmini's palace. She accused Krishna of being partial to Rukmini. But Rukmini was kind. She collected the flowers and returned them to Satyabhama. Satyabhama realised her mistake and agreed to share the flowers with Rukmini. Since then, Parijat flowers are offered whenever Krishna's idol is worshipped.
Another school strongly believes that this tree came into being from the ashes of Kunti. 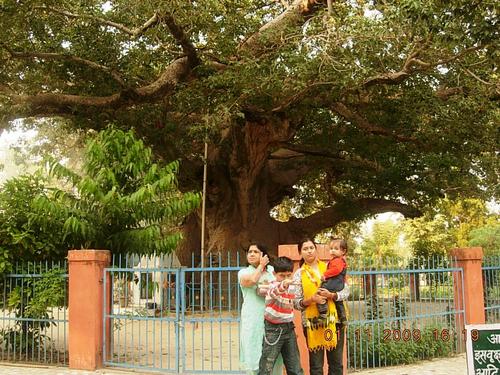 Every tuesday a fair is held here where local people worship the tree. The newly married couple visit it for blessings. Children are given the first symbolic hair-cut (mundan) here. A large fair is held on the occasion of Ganga Dussehra when the place gets overcrowded with pilgrims.

(The market outside Parijaat Temple ) 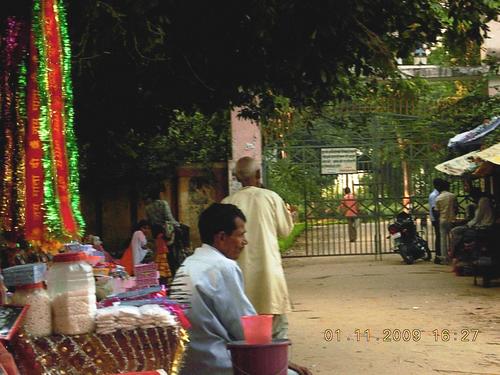 The nearest airport and main rail head is Lucknow, which is connected to all cites through many trains. From Lucknow you can take Auto/ Taxi/ Bus or Local train, available in abundance for Barabanki which is around 30 Kms from Lucknow. From Barabanki through the Lucknow – Faizabad road turn on the Shrawasti road to reach Ramnagar (around 16 kms.). From ramnagar take the link road to Kintur and Parijaat. around 6kms. (Local Bus and autos go for Kintur from Barabanki). We just drove from Lucknow and it took hardly 2hrs to reach there. The road was good enough considering the rural conditions.
Best time: It can be visited anytime round the year. However, rainy season (July- August) should be avoided because of detoriated rural road conditions. The place is full of pilgrims around Ganga Dussehra (Oct- Nov).

So, don't miss to visit the place if you are on a trip to Lucknow. Other palces around Parijaat would be the Kunteshwar temple (Shiva temple where Kunti used to offer prayers) around 2 kms away, Deva Sharif - daragah of Haji Waris Ali about 12 kms on Deva road from Barabanki.